CONSTITUTION DAY
Constitution Day is September 17 commemorating the signing of the U.S. Constitution on September 17, 1787. Learn about the formation and ratification of the Constitution by 39 brave men in the following children’s picture books: 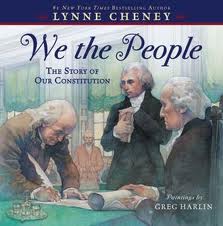 WE THE PEOPLE: THE STORY OF OUR CONSTITUTION (nonfiction)
by Lynne Cheney, illus. by Greg Harlin
Delegates from across the country gathered in Philadelphia in May 1787 and spent the sweltering summer creating a new framework for governing. This is a beautifully illustrated book about our founding document and its framers. 40 pages, Simon and Schuster, 2008 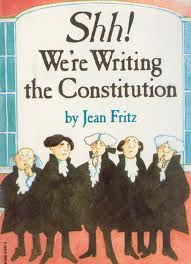 SHH! WE’RE WRITING THE CONSTITUTION (nonfiction)
by Jean Fritz, illus. by Tomie dePaola
After the American Revolution, each state was sovereign, and the people loved it because they were their own bosses. But George Washington knew that the states could not remain independent for long and survive. This is a humorous informational history lesson about the 55 delegates from 13 states that met together for four hot summer months in 1987 and argued and debated until they finally drew up a plan of government. DePaola’s illustrations add a touch of humor as well. The text of the Constitution is included. 64 pages, Paperstar, 1987 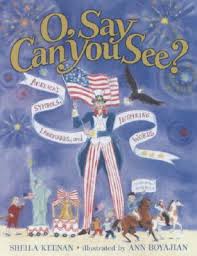 O, SAY CAN YOU SEE? AMERICA’S SYMBOLS, LANDMARKS, AND INSPIRING WORDS (nonfiction)
by Sheila Keenan
The patriotic symbols described and illustrated in this book stand for liberty, equality, and freedom. Contents include IMPORTANT PLACES, INTERESTING OBJECTS, AND INSPIRING WORDS. 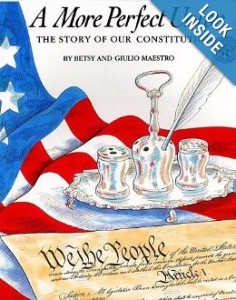 A MORE PERFECT UNION: THE STORY OF OUR CONSTITUTION (nonfiction)
by Betsy Maestro, illus. by Giulio Maestro
This is the story of the birth of the Constitution and the fifty-five men who drafted and ratified it. Additional information at the back of the book includes the Preamble, summary of the Articles of the Constitution, its signers, important dates, and The Bill of Rights. 48 pages, Harper Collins, 1987 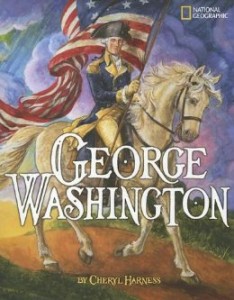 GEORGE WASHINGTON (nonfiction)
by Cheryl Harness
This picture-biography of George Washington begins with his adventurous childhood and his teenage years surveying, fencing, reading, and attending social events. His first military experience was serving as an officer in the Virginia militia fighting with the British in the French-Indian War. He saw (and remembered) the mistakes and arrogance of the British generals and realized that they could be beaten. What he learned was valuable later in the fight for independence from England. The story continues with George Washington’s marriage to Martha Custis, being a stepfather, farming, and hunting. Then there was more conflict with England, and Washington became a coffee drinker after the king of England slapped a tax on tea. When war with England erupted, Washington was selected to be General of the Army. Events of the American Revolution are highlighted including the winter at Valley Forge. Focus is given to Washington’s courage in fighting alongside the other soldiers and his determination to win. He understood that if he failed, the country would be ruined and he knew that Jefferson, Franklin, Adams, Hancock, and he himself would be arrested, taken back to England, and executed at traitors. After victory, he resigned as Commander of the Army and walked away from power he could have claimed. His countrymen loved him. Over the next four years, it was apparent that the country needed a stronger central government to keep peace at home, pay the nation’s debts, and regulate trade. The Constitution was written, and a federal government was formed. Washington became the first president of the United States. 48 pages, National Geographic, 2006

WE THE KIDS: THE PREAMBLE TO THE CONSTITUTION OF THE UNITED STATES (nonfiction)
by David Catrow
The words of the Preamble to the Constitution are accompanied by illustrations of three children and a dog going on a campout in the backyard…..demonstrating rights and responsibilities for young Americans. Each phrase of the preamble is described on a page at the front of the book. 32 pages, Puffin, 2005